01865763458 oxondrivingtuitions@gmail.com
Definitions and Use of Mini-Roundabouts

Definition of a Mini-Roundabout

A mini-roundabout is a type or form of junction control at which vehicles circulate around a white, reflectors, central circular road marking (central island) of between one and four metres in diameter, as shown. Vehicles entering the junction must give way to vehicles approaching from the right, circulating the central island.2 The central road marking is either flush or slightly raised  (no more than 125mm), in order that it can be driven over by larger vehicles that are physically incapable of manoeuvring around it. The dome is also raised to discourage vehicles from driving over the central island . Three white arrows are painted on the carriageway, within the gyratory area, around the central road marking, showing the direction of circulation.

Mini-roundabouts were initially developed as a method of improving safety at existing junctions, but are now increasingly included as part of new development proposals. Mini roundabouts may be introduced at junctions that experience problems with safety or side road delay. They can be used at junctions to break up long, straight sections of road or to achieve a sharp deviation of the main route without the need for low standard radii. Mini-roundabouts are often considered as an alternative to another junction type due to constrained highway space or because they are perceived to be less costly. Early examples were used as an alternative to traffic signals at very constrained sites where an alternative method of control was needed. The four main reasons why practitioners consider mini-roundabouts as a potential option are: • to improve the operation of an existing junction; • as an accident remedial measure; • as part of a traffic calming scheme; or • to provide access to new development.

Improving the Operation of an Existing Junction

A mini-roundabout can improve the operation of a junction by • Reducing the dominance of one traffic flow As the mini-roundabout works on the principle of ‘priority to circulating traffic from the right’, minor traffic flow can be given priority over a major traffic flow that would otherwise dominate the junction. • Giving priority to right turners Again the ‘priority’ principle of operation has been exploited for right-turning traffic, giving it priority over ahead movements from the opposing direction. • Facilitating access and reducing delay at side roads The ‘priority to the right’ rule effectively halves the traffic to which side road flow has to yield priority, making it easier for side road traffic to turn. • Improving capacity at overloaded junctions For a given road space, the mini-roundabout has a higher capacity than most alternatives and is very flexible in coping with variations in both volumes and proportions of traffic flow during the day.

As an Accident Remedial 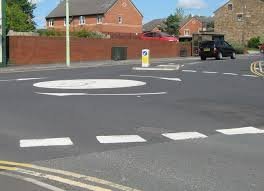 and serious accidents to all injury accidents) at 3-arm mini-roundabout sites is lower than at 3- arm signalled junctions and considerably lower than at 30 mph T-junctions.

The scope for accident reduction will clearly be dependent on specific junction characteristics, such as traffic flow and geometry, as well as accident types. When considering a mini-roundabout as an option, designers should refer to current guidance on accident numbers such as the MOLASSES database, and locally held records on accident levels.

As a Traffic Calming Measure

Designers may use numerical criteria to determine whether a mini-roundabout is suitable for access to a new development, with some suggesting side road traffic flows should be not less than 500 vehicles per day (AADT). Some Local Authorities use different criteria. For example, Lancashire, Cheshire and Bedfordshire County Councils prefer to use a ratio, suggesting side road flow should be a minimum of 10-15% of the major road flow. A lower flow limit is prescribed because difficulties can result from their use at lightly trafficked side roads, where emerging vehicles or turning movements are unexpected; if side road flows are too low then the main road will effectively operate under free flow conditions. Consideration should also be given to the usual site constraints and design criteria. On trunk roads it is unlikely that a miniroundabout would be an acceptable design solution for a new junction.

Introduction This guide explains the top 10 reasons people fail the car driving test in Great Britain. You need to be a good driver to pass the driving test. This guide gives examples of the types of mistakes people make during their test. 45.9%pass rate between April...

END_OF_DOCUMENT_TOKEN_TO_BE_REPLACED

How to Find Driving Test Cancellations during the lockdown

Booking Driving Test Due to the coronavirus lockdowns, we have a large backlog of driving tests. If you have recently attempted to sign up for a driving test, you may have noticed that many upcoming dates are unavailable.  Learn how to book your driving test in Oxford...

END_OF_DOCUMENT_TOKEN_TO_BE_REPLACED

Definitions and Use of Mini-Roundabouts